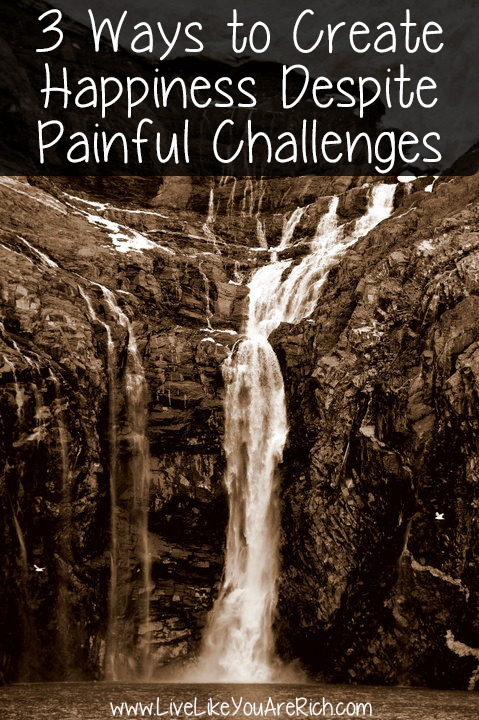 All of us have challenges. Life really makes us stretch. At times it can become almost more than we can bear. While it is not always possible to remove what is causing us to suffer, we can do a few things to help lessen our pain.

When I lived in Germany, I spoke German fluently and got to know a people that had suffered major challenges. Those who had lived through the Nazi Germany time period told stories that were very depressing and bleak.

A woman I met, Irmgard, became like another grandmother for me. I got to know her very well and one day she told me of her time during the war. She (a non-Jew) had a fairly normal childhood. During the war (when she was a teenager) she moved often, and at one time was living in a tiny little room with as many as 3 other families. At another point in the war she was hiding with other Germans in a cave. Once the Nazi soldiers found out that she spoke English and French, she was forced to be an interpreter. I know that practically all Jewish people were starving but what I was unaware of is the hunger and starvation she and most other non-Jewish Germans suffered from as well. Despite the starvation, the suffering, and having little or no freedom during the war, she managed to create a full and rich post-war life.

Another man I met, Wolfgang, was in the Hitler youth. He told of the brainwashing he experienced and the conflict he had when he realized his father was listening to forbidden radio stations. He was about to turn his dad into the Nazi’s as a traitor when he realized that he would lose his dad forever if he did. He spoke of that difficult decision and told me that he was so grateful his entire life that he did not turn his dad in like he had been indoctrinated to do.

Wolfgang told stories of American soldiers sharing their rations, gum, and other treats with the German kids. He said that once he realized how kind the American soldiers were vs. the Nazi soldiers he began realizing that he was being brainwashed. He was a happy older man who held to and spoke of the few good memories and decisions he made during the difficult war.

Another older man who was a Nazi soldier during the war was once asked (in front of me) by an American, “What was the war like?”. His normally happy countenance turned stone cold as he said in the sternest of ways, “If you had any idea what it was like, you would have NEVER had asked that question.” He is usually one of the happiest German men I know. He married a very sweet Swiss woman and I always enjoyed visiting them. He turned such a dark past into such a bright future by always radiating a positive outlook on life. He worked hard at it.

There were other people I met who had been defeated by the war. A hunched over old woman I met yelled at me out of the blue once. I didn’t react but my Swiss friend explained to me that it was just because a lot of older people were so defeated by the war they were left bitter and hateful.

I didn’t blame her. I don’t blame any other Germans who were so deeply scarred and never fully healed from these horrible times. I truly don’t know if I would have been able to create a good life after living through so much sorrow.

Recently, my sister (a talented musician) sent me this short video clip of how musical talent saved many Holocaust survivors. Alice Herz-Sommer and her “Sunday Friends” not only made the best of the horrible situation they were forced into, but by using their music they were able to create a much better environment for other suffering Jews in the concentration camp they were in as well.

After the war, they continued to use their music to brighten theirs and other’s lives. It is well worth watching.

I am aware that there are multiple other ways to create happiness. I was just so inspired by Alice Herz-Sommer that I wanted to write about the 3 main ways that helped her come away a victor despite living as a Jew in the Holocaust Concentration camps.

Alice Herz-Sommer said that music, optimism, and looking for and bringing beauty into every situation (even bad situations) is what creates a rich life for herself. I have gained strength from her and other inspiring post-war survivors who have done similar things to keep themselves afloat despite the most defeating of circumstances.

During difficult and downright miserable times, sometimes it is hard enough just to make it through. But if you can, try incorporating these 3 ways to create happiness:

#1- Listen to uplifting music,
#2- Try to bring as much optimism into your thoughts as possible, and
#3- Fill your life with as many things you love as you can.

Despite painful challenges, incorporating these three things can help you create a richer life and bring you happiness.

P.S. The photograph at the top of this article was taken in Alaska on a cold dreary day. I thought it was fitting because as you can see there are two beautiful white birds soaring peacefully in midst of an overcast grey sky and seemingly happy despite the a gigantic waterfall behind them.

How to Create a Streamlined Nighttime Routine

How to Create a Memorable & Cherished Christmas for Children

How to Cultivate Contentment and True Happiness

How to Balance Your Time and Create a More Well-Rounded Life
« Valentine’s Door Decor
8 Ways to Save Money, Lower Calories and Provide a Tastier Lunch for Your Kids »