If your baby has a raspy cough, has a temp (even low grade), and/or is struggling to breath, it is better to play it safe than sorry. Take them in to the doctor, instacare, or ER. I’m not a medical professional. I’m just sharing what I learned when our baby contracted RSV.

Things you’ll want to have on hand if you think your baby has RSV or may contract it:

Nose Frieda & Saline Drops– The ER doctors told me we needed to keep her airways clear and recommended I get a Nose Frieda (found here on Amazon, Target, BuyBuyBaby, Walmart, & Babies R US). I told them I already had it and was using it. It was very helpful in assisting her to breath. I hadn’t been able to get it all of the blockage out and wasn’t sure why until, in the children’s hospital a nurse also recommended the Nose Frieda AND saline drops (like these). Although we had a Nose Frieda, we weren’t using saline drops so the really thick dry mucus/blockage wasn’t coming out.

An item I discovered recently is the Owlet Baby Monitor. It is a smart sock that monitors the baby’s oxygen just like a hospital monitors oxygen through our skin. It alerts you if the baby’s oxygen levels drop and has very plausibly saved two of my friend’s babies! It’s simply amazing! I WISH I had it for my newborns but I didn’t. Luckily two of my friends whose babies contracted RSV had it and it helped them get to the hospital in time. You can read an honest and unbiased review on it here. Or here. If you decide to buy one, you can do so here.

Thermometer-Keep good tabs on your child’s temperature. It is really dangerous for infants to get high temperatures.

Essential oils- Essential oils are amazing and work wonders. I was diffusing the following oils in a diffuser in the same room as Aurora (our daughter) since her brother got sick. I know that using OnGuard and Frankincense and Lavender was a big reason of why I didn’t get sick.

Diffuser/Humidifier– keeping the air moist with a humidifier or steam from a hot shower to prevent the mucus from drying out and blocking the airways is great as well.

Health Insurance cards- and knowledge of the best place to take them if an emergency arises.

Children’s Tylenol- our doctor told us that they no longer make infant Tylenol because the dosing was getting mixed up. So that is why I say children’s Tylenol and not infants.

Have a breastpump handy. If you are nursing it is very likely that your baby will not drink much milk during the time they are feeling sick. I was engorged and had quite a bit of pain until I got my breast pump (I didn’t think to take it to the hospital). I also lost a bit of my supply and recovering it was difficult.

Prescription for suctioning. When we were discharged from the hospital we received a prescription for Aurora to be professionally suctioned (deep suctioning). Ask your doctor for one of these if your baby is badly congested.

If you go to the hospital, have a change or two of clothes.  Aurora did throw up on me a few times at the hospital so I was glad I packed an extra set of clothes.

I’ll share our story and bullet point things to remember below.

It started out with our son getting a nasty virus. I did my best to sanitize the house, I washed my hands constantly, and I ran the washer and dryer all day long. Yet, still our 3 month old caught it. A few days after she had a cold and raspy cough, we took our her into our pediatrician (on Wednesday) because it was getting worse. She said that Aurora was looking good and there was no cause for concern at that time. She did give us warning signs to look out for such as: difficulty breathing, sucking in of the stomach to draw breath, rapid breathing, her rib cage being visible when she breathes, changing color in face (turning purple or blueish), high temperatures, and unresponsiveness. She also told us that days 4 & 5 of bronchilitis/RSV are often the worst. Later that night (day 4)  she got progressively worse.

Aurora was in my room when she began having a bad coughing fit and turning purple because she couldn’t breath. I was across the room so I ran to her, picked her up, and lightly pounded on her back. Eventually she drew a breath. After another few minutes of having real difficulty breathing, I took her into the ER. They immediately took her back and started monitoring her oxygen, did testing, and called for a professional to suction her nose out. After she was suctioned out, her oxygen levels went up and she was able to sleep. I was so glad she was in our bedroom so I could see her and get to her fast! 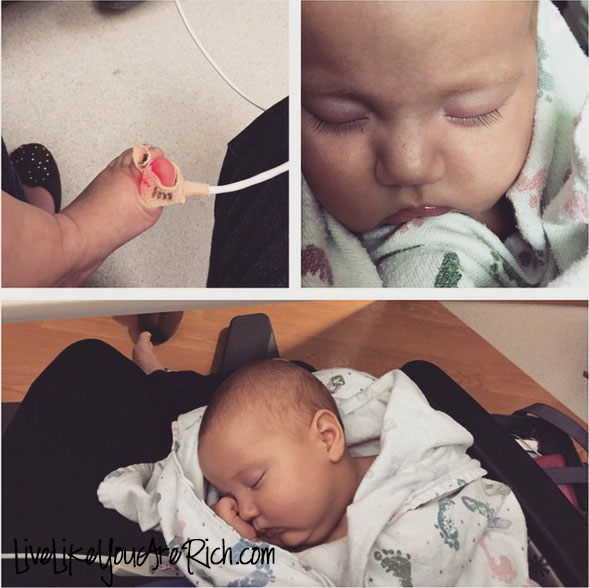 They told me that Aurora would need to be admitted to the hospital. I was a bit hesitant as she was breathing great (after she was suctioned out), her oxygen levels looked fantastic, and her temperature had gone down. I expressed my skepticism for the need to stay overnight to a nurse. The nurse was very serious and told me that if I didn’t want my daughter to pass away in the night I should stay to have her oxygen monitored. Because this nurse had come very close to loosing her niece to RSV, she really didn’t want me taking any chances. And she was right. It is better to be safe than sorry. 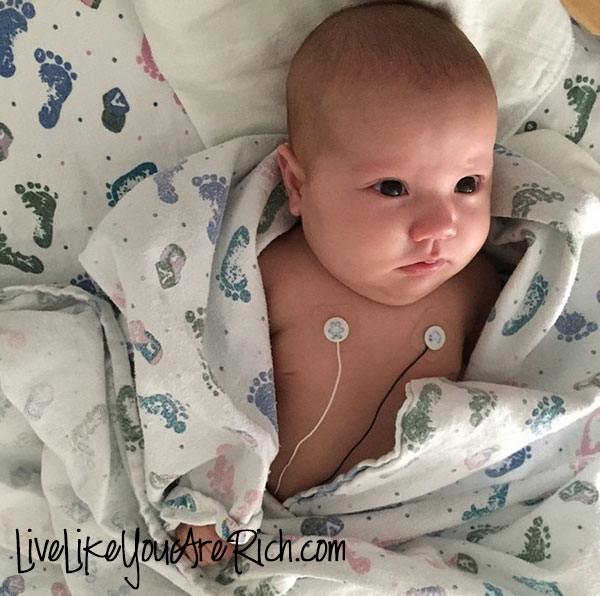 Aurora had a few coughing fits and threw up a few times during the night, but overall she did great. After our nights stay and because her oxygen levels were excellent and her temperature went down, they sent us home.

Yet just two hours after arriving home, her temperature started rising. In a very short time it had spiked to 103 F. I called the doctor and they told me to come in immediately.

At the doctors office they gave her Tylenol and did testing for secondary infections. It was very painful for me to see her screaming in pain while getting her blood drawn and getting a catheter for a urine sample, but she recovered from these procedures quickly. Again, it is better to be safe than sorry because infections that are due to high temperatures can be very dangerous for newborns. 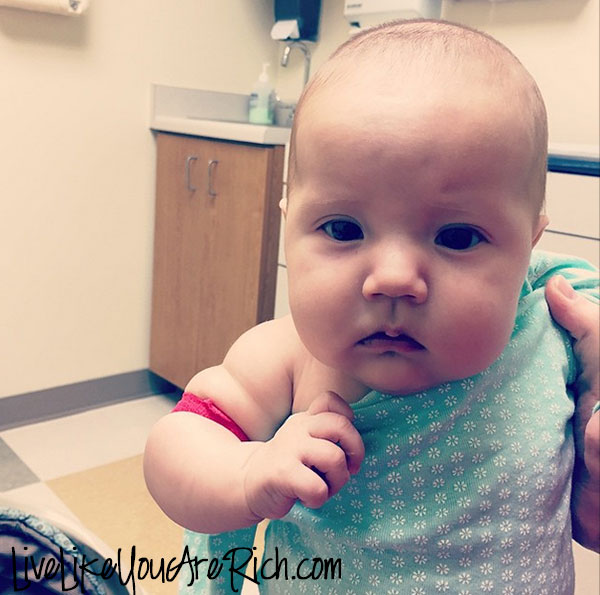 Just look at those darling biceps!

Luckily, the test results came back in our favor and due to the Tylenol, her temperature dropped. We were again sent home. Later that evening she significantly approved. We had gotten past the day 4 & 5 hump and Aurora was doing so much better.

It took another week or so for her cough to completely disappear, but she got steadily better. To say that we are really happy she improved so quickly is an understatement.

RSV can get worse very quickly—it is important to monitor your baby constantly.

Keep your baby in the same room as you so you are there if an emergency arises.

Keep your baby’s nose and airways suctioned out with a Nose Frieda and saline drops.

Watch for color changes in their face and skin indicating a loss of oxygen-this warrants an emergency room visit.

Watch for the ‘pulling-in and pulling-under’ of their stomach under the rib cage. This indicates they are working overly hard to breath and should taken in.

Listen for laborious breathing and if it becomes very quick and shallow go in.

Monitor your baby’s temperature. For under 3 months old call if over 100 degrees, go in if over 101 degrees.

Take baby in to medical professionals if you aren’t 100% sure about the situation.

RSV peaks at day 4 & 5 after it is contracted. Be especially observant during those days.

If a medical professional recommends you stay overnight with your newborn for observation, stay.

The doctors and nurses all pretty much told us the same advice on preventing RSV which was: During winter months try to stay inside or go to less kid-friendly areas. Sanitize and wash hands often.

We hadn’t taken my son to nursery at our church for three months. We felt that after our daughter was three months old, she would be more likely to combat a virus if he were to get sick. We were right to wait three months because the first week we allowed him to go to nursery he got very sick from it. If your child is sick or if you have a newborn around, it is best to play it safe and become a ‘germ-o-phob’. Kids spread germs so easily.

We prayed hard and had many praying for Aurora during days 4 & 5 of her RSV and we are so happy we were blessed and she is okay. I wanted to share this experience so you can glean from it whatever may be applicable for your situation.

My Favorite Recipe to Teach Children How to Use Kitchen Tools